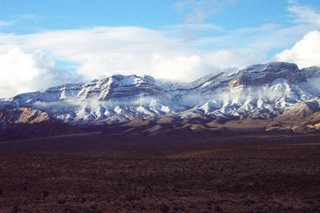 Ahhhh, Red Rock Canyon with snow! This is a rare shot, but for me it was inspirational. The heat in Vegas has been hot, hot, hot! Not only has it been hot, but it has been unusually humid! So when I pondered what picture to post today, it naturally had to be this one (which I took a few years back)! We need something to cool us down!
Posted by Wendi at Monday, July 31, 2006 2 comments: 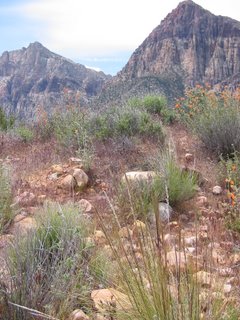 Las Vegas has more to offer than casinos and lights. It is home to Red Rock Canyon, which is a National Conservation Area. Just 20-30 minutes from the strip there are 195,819 acres of land that are visited by more than one million visitors annually. This is just one view of the park from one of it's many hikes. However, if you are planning on visiting the park this summer come prepared for temperatures in the 100's of degrees. The best time of year to visit Red Rock Canyon is in the fall, winter, or spring!
Posted by Wendi at Sunday, July 30, 2006 No comments: 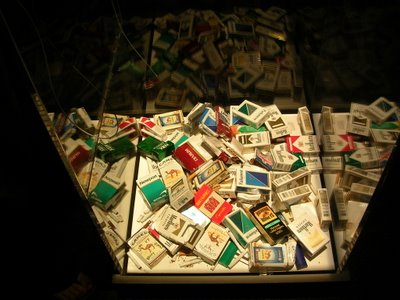 "On average a pack of cigarettes takes two hours and twenty minutes off your life. We'd like you to be around longer. Leave your cigarettes here and stop smoking!"
This receptacle was placed next to a display of the healthy lungs of a nonsmoker versus the lungs of a smoker at the BODIES exhibit I showed yesterday.
*I'd like you to be around longer too!
Posted by Wendi at Sunday, July 30, 2006 4 comments: 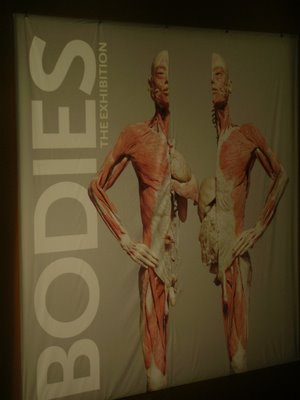 For those of us who did not enroll in an anatomy course in college the Tropicana Hotel is currently hosting a fascinating exhibit called BODIES. BODIES features human cadavers showing us what we look like on the inside. The exhibition gives you a greater appreciation for the miracle that is the human body and an understanding of the importance of taking care of our amazing machines!
Posted by Wendi at Saturday, July 29, 2006 4 comments: 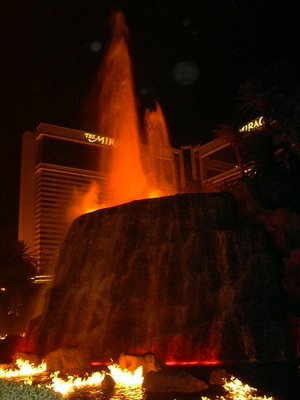 This is the Volcano of the Mirage Casino.

I now pass this site over to a local, Christy. Please come and visit this site often and enjoy the photo's of a local. 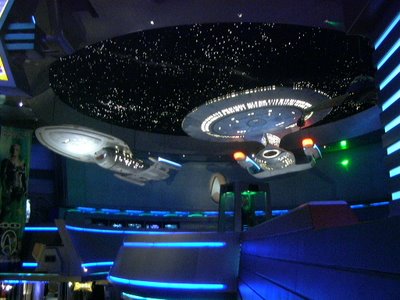 Sorry, I have had some trouble uploading pictures.

At the Las Vegas Hilton, they have transformed part of their hotel to a space theme and built Star Trek the Experience. There are these large scale models of star ships and you can go through 2 experiences. One you fly in a shuttle, the other you get chased by Borg.

After all the fun, you can relax at Quarks bar and enjoy space themed meals.

Christy, as an alternative to emailing me, let Eric at Paris Daily Photo know the new Las Vegas Daily Photo address and then leave a comment with the new address on my blog and then you can take over. I will just keep posting until you let me know. Thanks.
Posted by Wendi at Thursday, July 27, 2006 No comments:

I am having problems uploading pictures at the moment.

To Christy (Cropstar5), you are welcome to take over Las Vegas Daily Photo. Send me an email at delta775394@tpg.com.au and I will forward the user name and password to you. Hear from you soon.
Posted by Wendi at Wednesday, July 26, 2006 No comments:

That's a lot of money 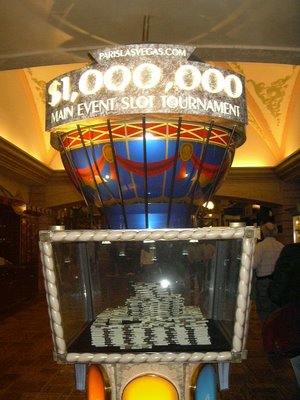 In several of the casino's, they have 1 million dollars sitting in a cabinet. This is the prize for a poker tournament. I wonder if it is real.

Las Vegas City History - 1950 (Part 3) - November 15: The Kefauver Committee comes to Las Vegas. The committee hears the testimony of merely six witnesses, and after less than a full day of inquiries, calls the Las Vegas portion of the investigation to an end.
Posted by Wendi at Sunday, July 23, 2006 2 comments: 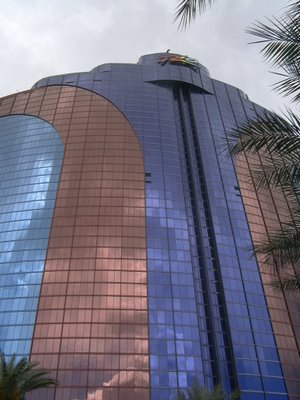 This building is off the strip and involves quite a walk. I tried to take a cab back to the strip, but the taxi drivers said they would get in trouble if they took me. Everything had to be arranged with the concierge and that would have cost extra money and I was too shy to ask.

Las Vegs City History - 1950 (Part 2) - Spring: The Special Committee to Investigate Organized Crime in Interstate Commerce, known popularly as the Kefauver Committee, hearings begin. Senator Estes Kefauver and his colleagues interrogate hundreds of witnesses in fourteen cities over the course of fifteen months in an investigation of organized crime in America. Some 30 million Americans watch the hearings broadcast live on television.
Posted by Wendi at Saturday, July 22, 2006 No comments: 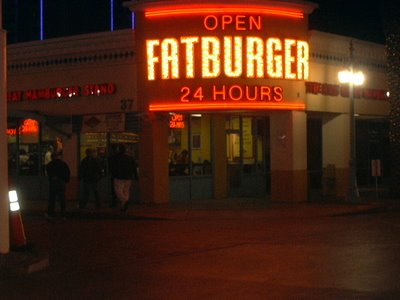 Las Vegas City History - 1950 - By this time, McCarran Airport directs sixteen daily flights, and the Clark County population has exploded to 48,811. The post-war economic boom of the Fifties gives rise to a resort boom, as owners, following the model set by Siegel's Flamingo, build up resorts on the Strip. The majority of these resorts are funded by Syndicate money.
Posted by Wendi at Friday, July 21, 2006 1 comment: 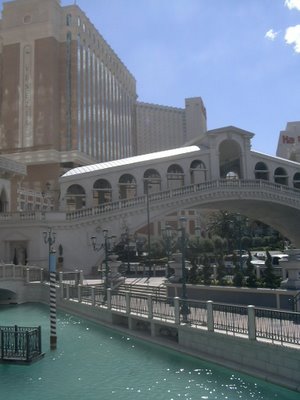 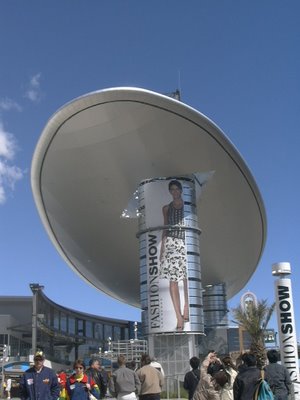 Looking like a spacecraft crashed here, this is the Fashion show mall. It is one of the major fashion destinations and they even put in an electronic and gadget shop to keep the men occupied.

In the tradition of emulating other places, they have shops like Macy's, Saks fifth avenue, Bloomingdales, Fredericks of Hollywood. For the men, they have sharper image and the NASCAR store.

Las Vegas City History - 1948 - Alamo Airport is purchased by Clark County and eventually named McCarran airport after Nevada U.S. Senator Pat McCarran, for whom the development of aviation had been a cause.
Posted by Wendi at Wednesday, July 19, 2006 1 comment: 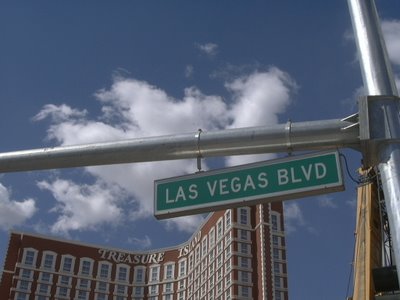 March: The Flamingo reopens for business. This time, Siegel's attempt is successful, and the resort begins turning a profit by the end of the month. 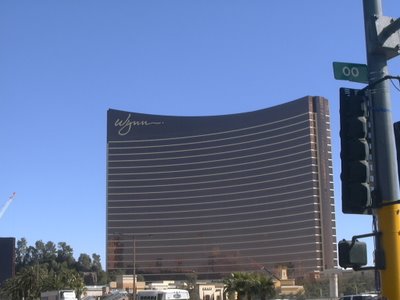 The Wynn is the latest casino to be built in Las Vegas.

The resort has on display much of Wynn's considerable art collection. The centerpiece of the collection is Le Rêve, the Pablo Picasso portrait that was the working name of the resort project. Wynn reportedly purchased the painting for $42 million, one of the highest prices ever paid for a Picasso.

Built at a cost of US$2.7 billion, it was the largest privately funded construction project in the nation.

An ad on tv shows him on the roof at the uppermost tip. He says that this is the first building he would sign his name to. At the end of the ad he says, "Can someone let me down please".
Posted by Wendi at Monday, July 17, 2006 2 comments: 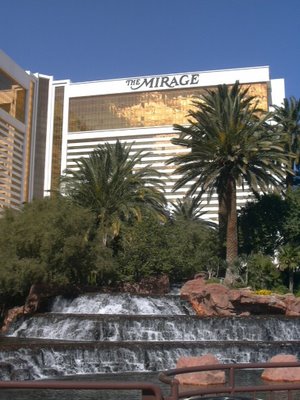 The Mirage has a volcano show where lava (water lit up red) spurts out the top of the volcano and then fire comes down a waterfall and spreads out over the water.

You can feel the heat of it when it gets near.

December 26: The Flamingo Hotel, built with mob money byBenjamin "Bugsy" Siegel, opens prematurely. Unlike other resorts on the strip that flaunt an Old West style, the Flamingo is a glamorous destination for high rollers. But without a finished hotel, Siegel loses revenue and is forced to close the resort until construction is completed. 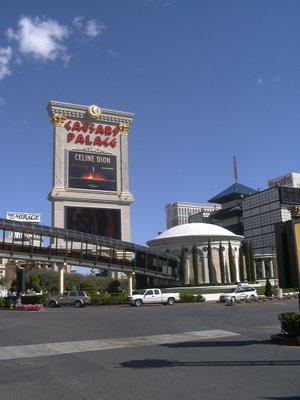 They built Celine Dion her own theater to do her show for 5 years. In one part she decends onto the stage sitting at her piano.

Las Vegas City History - 1945 - August 16: World War II ends. Nearby Nellis Air Force Base and the Basic Magnesium, Inc. plant have combined to bring more than 12,000 new residents to Las Vegas. Military men, many of whom were employed at Nellis Air Force Base, stay in the Las Vegas area, lured by cheap land at $5 per acre.
Posted by Wendi at Saturday, July 15, 2006 No comments: 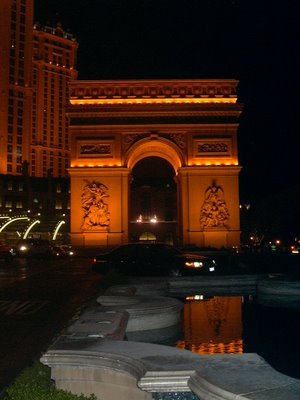 This is the Las Vegas version of the Arc de Triomphe up in lights like the one in New York.

Las Vegas City History - 1944 - November: Liberace makes his Las Vegas debut. The showman, who would be described by Time magazine as "a synonym for glorious excess," would become a staple of Vegas entertainment, and by 1972 would be earning a record $300,000 a week, more than any other Vegas headliner at the time.
Posted by Wendi at Friday, July 14, 2006 No comments: 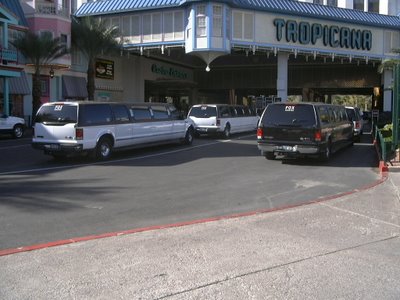 So many limo's in one place.

Las Vegas City History - 1943 - By this time, each week more than 4,000 people were graduating from the Las Vegas Gunnery School, later known as Nellis Air Force Base.

In the midst of World War II, Basic Magnesium, Inc. is soon developing five million pounds of magnesium every day. Crafted into lightweight airplane wings, the magnesium is then shipped across the globe to help Allied efforts in the war. 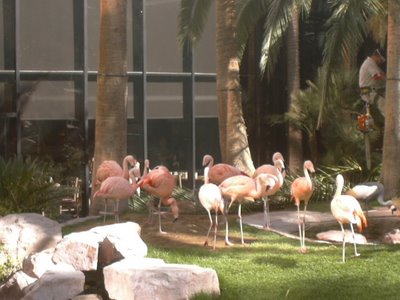 The above photo shows the flamingo's at Flamingo's hotel. They are this light pink colour because they aren't fed what they would get in the wild.

Flamingo's should be bright red from the food they consume. 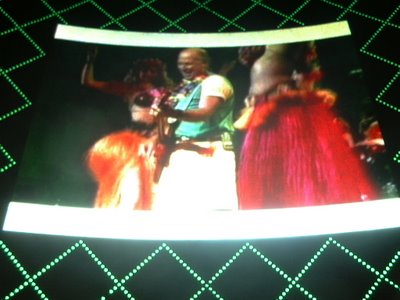 The screen at the MGM grand is huge and very bright at night.

In answer to a previous question - I don't think they dance the flamingo at the Flamingo Hotel.

Flamenco (the dance from Spain) is commonly misspelled as Flamingo. Click here to see some famingos dance and click here to see still photos of the Flamenco dance (they also called it the Flamingo) 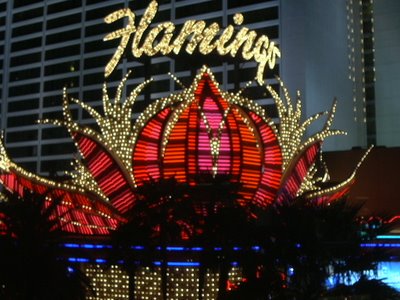 The Flamingo is one of the original casinos on the strip.

They have live Flamingos out the back.

Las Vegas City History - 1939 - January: Ria Langham waits out her six-week residency requirement in Las Vegas to divorce her husband Clark Gable. The ensuing publicity briefly garners Las Vegas the title of "Divorce Capital of the World," until the title is seized again by Reno in the 1950s.
Posted by Wendi at Sunday, July 09, 2006 1 comment: 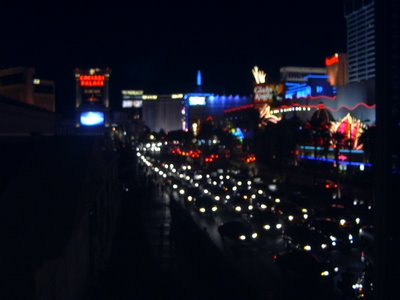 Sorry for the blurred photo, but this shows you how heavy the traffic is along the strip.

I feel Las Vagas would greatly benefit if this road was turned into a pedestrian footpath.
Posted by Wendi at Saturday, July 08, 2006 2 comments: 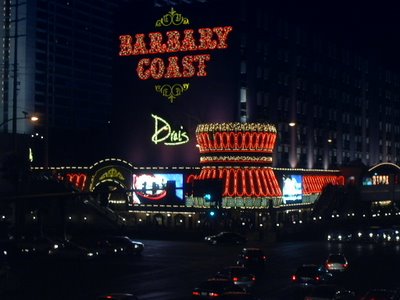 This casino is about halfway up the strip and is one of the older buildings.
Posted by Wendi at Friday, July 07, 2006 No comments: 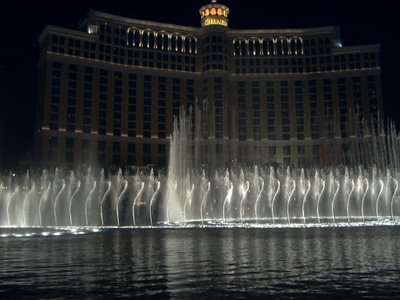 The dancing fountains of the Bellagio.

When I first stopped outside of the Bellagio, there was smoke rolling across the water. Then flashes of light appeared in the smoke along with thunder sounds.

Next the music of Celine Dion "my heart will go on" came on with the dancing fountians. I'm not into her music, but the whole combination was magic.

Authorities in Los Angeles begin cracking down on illegal gambling circuits. Seeking refuge, many of these ousted gamblers and gangsters flee to Las Vegas. 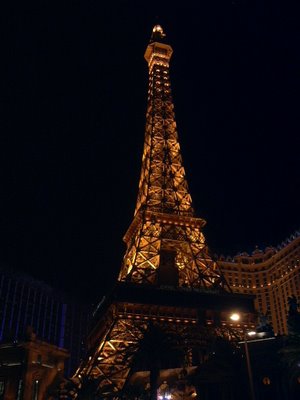 A signature of the Las Vegas skyline, the replica Eiffel Tower at Paris Las Vegas is an exact reproduction of one of Europe’s most famous landmarks, rendered meticulously at 1/2 scale.

The Eiffel Tower Experience allows you to ride to the top, where you’ll have a panoramic view of the valley, from 460 feet above the ground. Along the way, an experienced elevator operator will point out Vegas landmarks. The Eiffel Tower Restaurant, located on the 11th floor, has breathtaking views of the Strip.

The legs of the tower go through the building and you enter the elevator from inside. 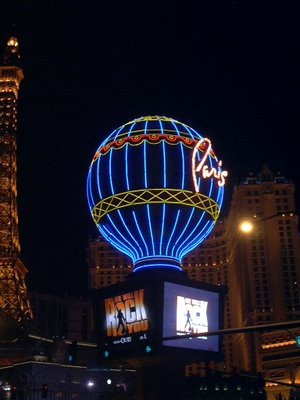 One of the landmarks outside the Paris hotel and casino. 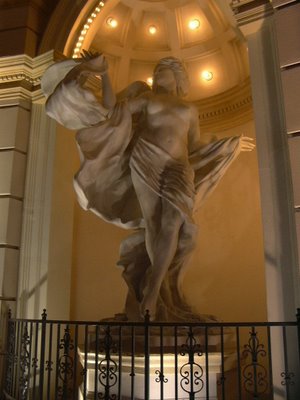 There are many statues at the Monte Carlo Hotel.

I love the way the material around the lady is flowing like it is caught in the wind.

In order to bring people to the city, Las Vegas boosters begin "Helldorado Days." Las Vegans attempt to capitalize on the city's frontier roots, marketing the city as a vacation spot in the theme of the Old West.