We've had some rain this week! That may not sound too exciting to some, but when your average annual rainfall is less than two inches, it is exciting when you get a little! The weather has been really pretty cold; the wind has picked up a lot, a sure sign that spring is upon us! I took this picture of my windshield- I like seeing the images of the houses as they distort a little in the water- kind of a "melting clocks" theme!

Posted by Wendi at Wednesday, February 28, 2007 No comments: 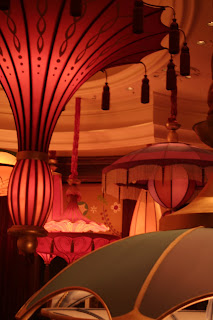 We found these cool lanterns in the Wynn Hotel-
What really intrigued me about them is that they move up and down, never staying in the same place. I also really liked the colors they had chosen
Dave
Posted by Wendi at Tuesday, February 27, 2007 4 comments: 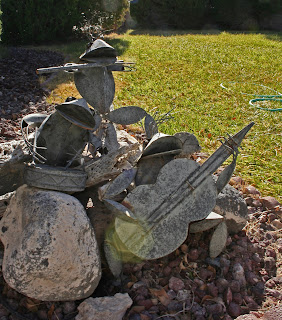 I saw this statue in a yard the other day (yes Kirk, it was a while ago) and thought it was really cool
Dave
Posted by Wendi at Sunday, February 25, 2007 No comments: 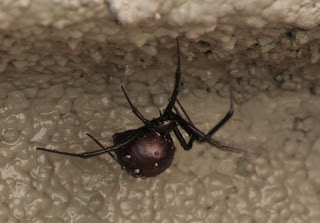 The other day I ran into a Black Widow Spider redoing her web after it had been destroyed by a barrage of water from a hose- being the slight arachnaphobe, my first thought was to kill it, but then I started to watch how she moved and how truly beautiful the spider was, and how intricate her web and movements were. I like this picture because it looks like she's suspended in the air. It was truly fascinating to watch, and I was actually sad when it came time to end the show...
Dave
Posted by Wendi at Saturday, February 24, 2007 5 comments:

And you thought billboards were big... 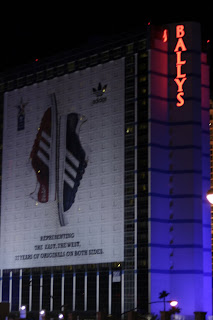 This is a full size Adidas ad- full size as in the side of Bally's Hotel and Casino! Last weekend we had the NBA Allstar game, as well as all of the events that go along with it: it was pretty crazy around here! A number of the people I've talked to are glad its over: the crowds were large and, according to some, very rude and inhospitable. Unfortunately the outside perception of Las Vegas being a great place to party has really stuck, so when people come here, they assume they have the right to lose all decency... but its over now, and life runs on! Adidas had an ad on the MGM too which was really cool looking, but I couldn't get to it in time to get the picture before they took it down. I'm curious- do you think you can see through the film if you're in one of those rooms?
Dave
Posted by Wendi at Friday, February 23, 2007 No comments: 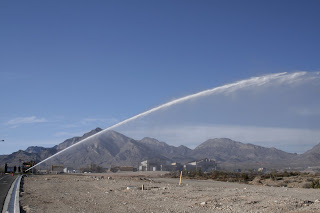 I was driving the other day and saw this firetruck spraying water a couple of hundred feet out into the desert- coming from a state that has many large forest fires every year, one nice thing about living in the middle of a large desert is that there isn't a whole lot to burn!
Dave
Posted by Wendi at Thursday, February 22, 2007 2 comments:

Year of the Pig 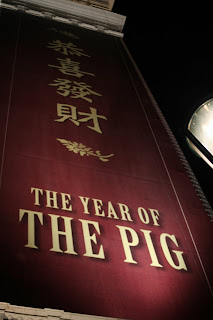 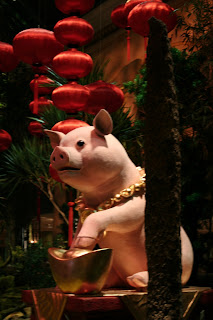 In case you didn't know (I didn't until a couple of days ago) its Chinese New Year! And if the giant sign at the Venetian didn't make it clear, Bellagio has a big pig (and its nose and ears move too!) to illustrate the point! According to Wikipedia, the new year started on the 18th, and will go till the end of the first lunar month, which will be in March. Until then, it'll be a great party!
-Dave
Posted by Wendi at Wednesday, February 21, 2007 No comments: 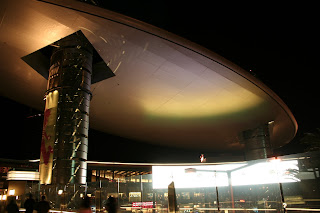 To those skeptics out there here is proof there was a UFO out here! OK, it was really just the large dish over the entrance to the Fashion Show Mall. Underneath the dish is a myriad of shops, clubs, and restaurants, including one of my favorites in Vegas- Cafe Babareeba, a Spanish themed restaurant, which we'll get in a future post.
-Dave 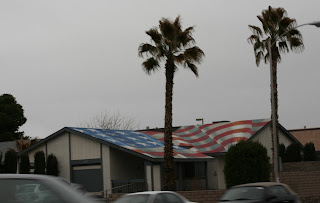 Happy President's Day! I saw this roof the other day, and thought I had to get a picture of it. Unfortunately for those that had the day off, its been a rainy day today, but still beautiful!
Dave
Posted by Wendi at Monday, February 19, 2007 No comments: 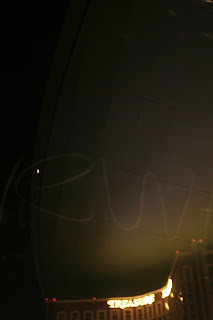 Well, for those of you who don't believe in UFO's, my friend Erinn and I saw one last night down on the Strip- Here it is hovering over Treasure Island! If anyone can dispute the evidence, and give another explanation as to what this wierd object is, please let us know!
Dave
Posted by Wendi at Sunday, February 18, 2007 3 comments: 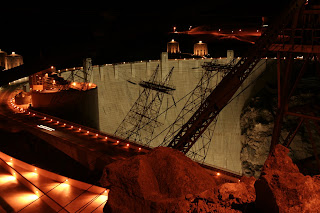 This is a view of the dam from the Nevada side, up the hill a ways. One of the most interesting things (to me anyway) is the cables that go across the gorge- it boggles my mind to think how they were pulled to the other side. 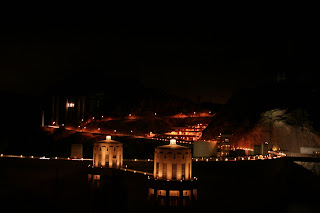 One of the great thing about the Hoover Dam is trying to get across it! There is usually a long line of cars, and it can take a couple of hours to get to it and then cross- that was the case here, the line was very long, and I was able to get out and take several long exposures and miss the wait.
Dave
Posted by Wendi at Thursday, February 15, 2007 No comments: 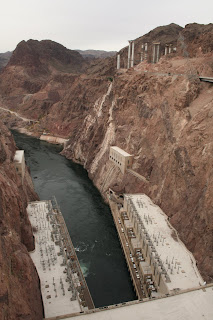 Hey all! Welcome back! We've all been a little busy, sorry for the abscence! Here is a picture of the Hoover Dam and the new bridge they are building to bypass the dam. They are someof the coolest architectural and engineering feats of the southwest! Both are huge projects, one created the largest man made lake in the U.S. (Lake Mead). The bridge was started in response to the attacks of Sept. 11, to create a bypass around the dam, which supplies electricity and water to Las Vegas, Boulder City and much of Southern California and Arizona.
Dave
Posted by Wendi at Wednesday, February 14, 2007 1 comment: