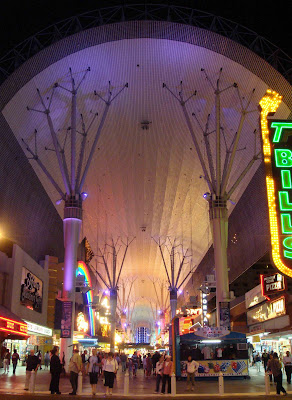 The Freemont Street Experience was first created in 1905 and it was the very first street to be paved in Las Vegas! The real excitement is in 1995 when the canopy above Freemont Street was built, its stretches over 5 football feilds long and then in 2004 they updated the canopy to LED technology to enable evern more detailed light shows. There is currently over 12 million light blubs and the structure weighs over 24,000 pounds. The investment of the canopy cost 70 million. I recieved my information from a handy website called: http://www.vegasexperience.com. But I think the real history is that Freemont Street was named after Colonel John Freemont, an explorer who explorered Nevada with Kit Carson, Carson later becoming a name of a city in Nevada that was to become the capital of our state one day. I hope you all have enjoyed the history lesson! -Erinn ;)
Posted by Wendi at Friday, June 08, 2007

I am flabbergasted that the canopy cost that much money. While it looks nice and is in Lav Vegas, I think somebody got taken to the cleaners. I have seen whole streets, blocks long covered in magnificent curved, waterproof and weatherproof coverings that permits heat in the winter and air conditioning in the summer and the cost was considerably less for each street. Not only that, they don't have anything inside on the street but ceramic tile and lots of people.

I like your photo but think the canopy is way too expensive.

That's really incredibly, amazing photo. This street look like from the fairy-tales.
But I must agree with Abraham. Thing's like that cost too much. Especially that's too much for enviroment. On the other side Las Vegas is just one one the world.
Well...

That's quite incredible, it must be fascinating to watch the lights!

On our last trip to Vegas we were planning to make it to the Fremont Experience, even started that way, but never made it. Now you make me sorry we didn't stick to the plan.

I've heard so much about this street that I want to visit Las Vegas to see this. Well, and the Hoover dam. I've been to Elko, Nevada many times to visit family, always flew into Salt Lake though but never once visited Las Vegas. someday I shall see this....

Ya, the canopy is awfully expensive, but the main question is the effect of the canopy on energy on a long term... Any idea?